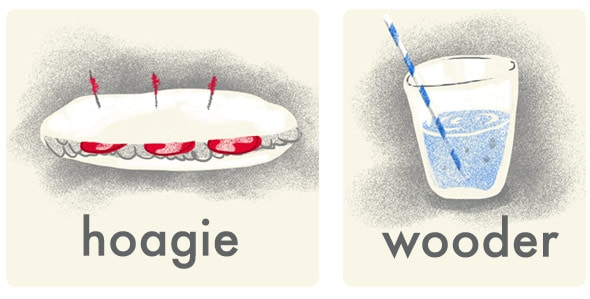 2. “Youse”
Philadelphians are busy people with no time to separate every single word. “Youse” is plural for “you all” or as the say in the south “y’all”. Feel free to add this to another word for a full phrase, “I saw youse” or “Youse guys”.

3. “Did jeet?”
In Swedish, this would translate to something like “Haru äti?”. What the Philadelphians mean is “Did you eat?”, but since they’re so busy it’s better to say “Did jeet?”. If you are a really, really busy Philadelphian, just say “Dijeet?”.

4. “Jawn”
This all-encompassing, all Philly word. “Jawn” is an object and a place, it’s an event or a sequence of events, it’s plural and singular. For example, “We brought that jawn to the jawn the other day” or “Did you go to that jawn over at Anders’s the other night?” It can be used in just about any sentance which is quite amazing.

5. “Water and creek”
These two words are really good examples to use when you want to explain to someone how the Philadelphian dialect sounds. Water becomes something closer to “wooder” and creek turns into something like “crick” on the tongues of native Philadelphians.

6. “Jimmies”
In the summer heat you might order a cone and in Philadelphia, cones comes with the option of adding “jimmies” on top. In Sweden we simply call it “strössel” and most Americans would call it “rainbow sprinkles”.

9. “City Special”
The good old dive bars in Philly still serve the classy City Special: a shot of Jim Beam and a can of PBR. The CIty Special originally sold for $3, now they regularly sell for $5-8.

10. “Wiz wit?”
The fine folks at our local hoagie spot will say this, always with a question mark after it. For Philadelphians, it is one of life’s more important questions. Americans from other places would say “Would you like some cheese whiz with you cheesesteak?” but the Philadelphias keep it simple, “Wiz wit?”.

11. “Water ice”
In Sweden, the closest thing we have to this sweet frozen dessert is sorbet. Most Americans call it “Italian ice”. In Philly it’s “water ice”. Although it probably sounds more like “wooder ice” when Philadelphians order it.

12. “Hoagie”
People all over the world call them “sandwiches”, some people call them “subs” or “heroes”. Philadelphians however, call them “hoagies”. Don’t try to use those other dirty words in Philly, they won’t be tolerated.